Colin Milburn (2005) discusses a scene in the book Nano, by John Robert Marlow, where someone watches as nanobots take a person apart atom by atom. The viewer is entranced by the scene, ‘because it undermines the conceptual integrity of the body, exposing the precarious foundations of human structure’ (2005, p. 291). The idea that nanotechnology and their interactions with our biomolecular processes might partake in a making and remaking of the body typically creates fear in the public. Dystopic scenarios of nanotech gone rogue populate many sci-fi novels and films, such as Prey by Michael Crichton, and the aforementioned Nano. The public perception of nanotechnologies appears to be based on emotion as much as on information, and these technologies seem to engender fear in the public partly because they are unable to be seen. I would argue that this invisibility (caused not only by their size but by the labelling of products containing nanoparticles simply by their scale-independent chemical name, for example, the nanoparticles used in sunscreen being listed as zinc oxide) hinders discussion around where and how these technologies might be influencing our lives and whether or not these are desirable changes.

Most of the diagnostic technologies being created in the Ian Potter NanoBioSensing Laboratory interact with biological fluids removed from the body, however, where they are incorporated with the body it seems wise to question their effects — science doesn’t yet have comprehensive long term studies to claim the complete safety of nanoparticles. Consideration of technologies and their implications — biological, social and cultural — is also salient in an era where technologies are proliferating at an almost exponential rate. In Australia, it seems timely given the push by Peter Dutton to create a national infrastructure for facial recognition surveillance. My personal view is that we should be publicly debating technologies before they are released into the wild. So how might art help stimulate discussion around emergent technologies such as NanoBioSensing Technologies? One approach is to encourage public engagement and stimulate debate by making them visible and impossible to ignore.

The past two weeks I have been using a high resolution Scanning Electron Microscopy (SEM) to visualise the nanotechnologies being developed in the lab, and also developing some primary experiments leading toward capturing cells interacting with NanoBioSensing Technologies. 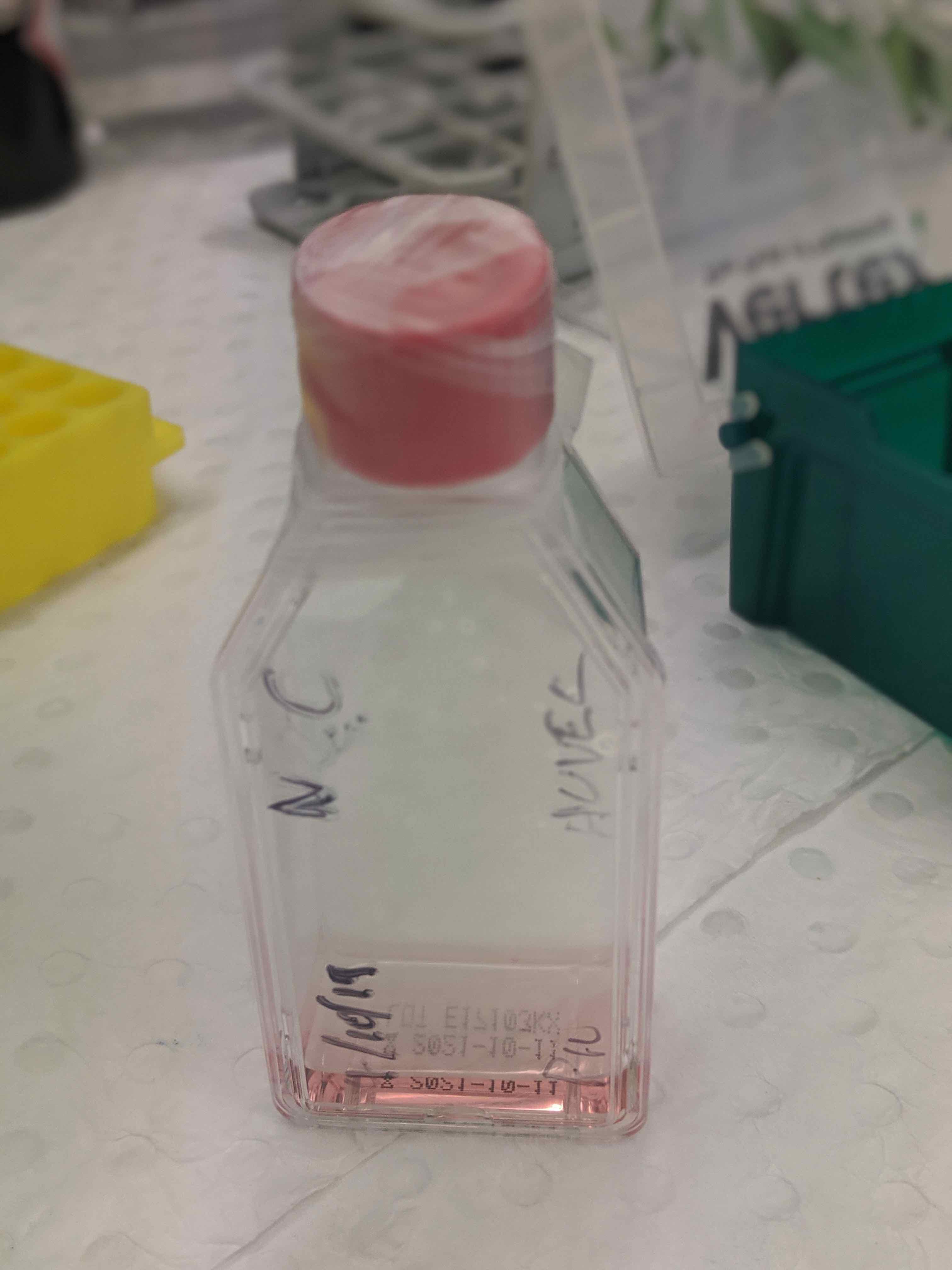 After growing the cells on a glass coverslip, they are washed and fixed and the coverslip is mounted on a metallic pin — this helps the conductivity of electrons in the microscope. (In SEM, electrons, instead of photons of light, are used to image a sample.) 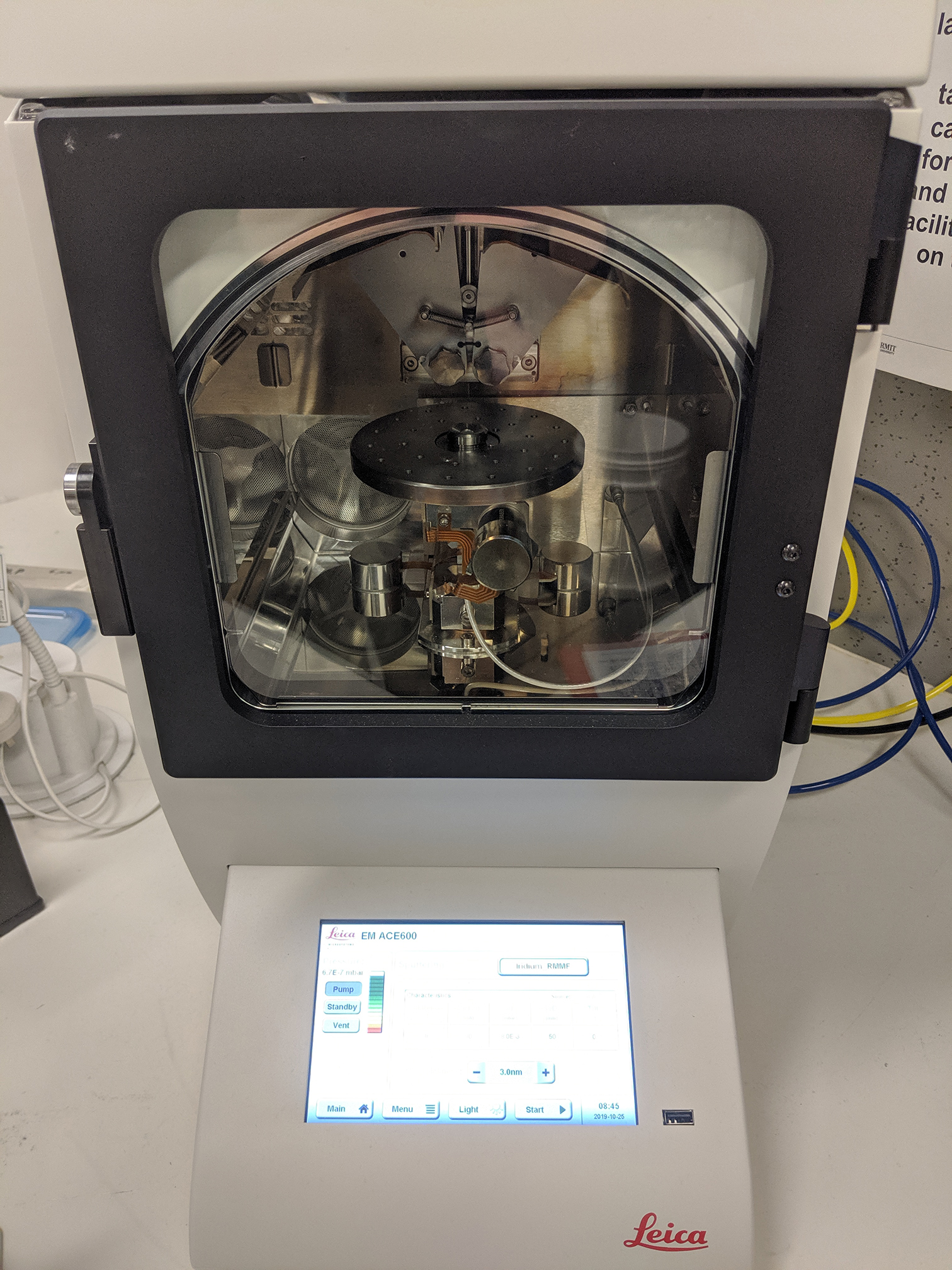 The sample is then sputter coated with a metal such as gold or iridium. Without this coating a biological sample with low conductivity wouldn’t have enough contrast to be seen particularly well. The FEI Verios SEM at the RMIT Microscopy and Microanalysis Facility (RMMF). The sample holder and chamber of the SEM.

I have been using these cells to test a visual media workflow and integrate scientific imaging processes with media software, specifically capturing large volumes of images to enable virtual cinematography. The gridded lines of the FEI MAPS software that enables data collection across large areas, producing images of up to a terabyte that have sufficiently high depth, width and height resolution that they can later be used for virtual applications.

Following these large data collections, I have been experimenting with applying a virtual camera to the collections of images, animation where the final video is High Definition (1920×1080 pixels). The next tests will experiment with up to 8K video tracking across a two-dimensional plane but also across scales.

Huge thanks are due to Sam Anderson of the Ian Potter NanoBioSensing Laboratory, and the staff of the RMMF, especially Dr Matthew Field, who have facilitated this exploration and been open to experimenting with imaging software in the facility. In order to engage the public and stimulate discussion around NanoBioSensing Technologies, I plan to to put representations of the technologies into the public space… plans are afoot to incorporate this imaging process into a large scale interactive public installation. Watch this space!